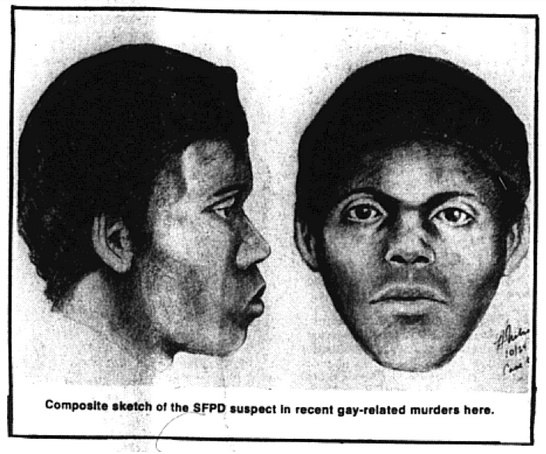 I’ve been warned off the case of Father Kunz, certain friends in law enforcement reminding me of the power of the Catholic Church or, as one luridly believed, of the power of a cabal therein to enforce “Satan’s Lodge.” I have recently been introduced to the details of how the church covered up the fact the Fox Village Trailer Park rapist had been a 44 year old priest. The church sent him west to a monastery, the type where his fork and knife were taken away at the dinner table. This must have satisfied the DA, the judge dropping the charges except for breaking and entering.

Conspiracies, gossip, acrimony– I loath it.

But I have encountered something more frustrating. A serial murder case where the culprit is known, where I wish to break the case, but where the one sure witness, the “nationally known” celebrity who survived an attempt on his life, will never want to talk. It is unlikely the San Francisco Co. DA even knows of the existence or importance of the case anymore. It has been buried since 1975.

How to break the case? For journalistic purposes, the account of the celebrity is crucial, as I feel it would confirm that no dalliance, shall we say, took place. It would give us the unquestioned MO of the killer. I believe that after he charmed prospective victims in the bars of the late night Castro, he went with them to secluded places. Well, this much is actually known. But I deduce from the evidence I have, and the logistics of the crime scenes, that before anything happened, to their surprise, he whipped out a butcher’s knife and did Norman Bates.

But for a few, he went to their apartments. Three survived. About 8 didn’t. The actual number really isn’t known for certainty. SF newspapers didn’t report it much and certainly with little clarity. Underground gay rags did, but obviously the information didn’t go far and journalistic integrity was not always there.

The Doodler had one of the most unique MOs in the history of crime. He was an artistic young man who went into the bars of SF’s gay district, charmed the guests, drew “doodles” of them on his sketch pad– he was quite talented– and they left to continue the night elsewhere. Only the end result was that the patrons ended up slashed to pieces at Ocean Beach or in Golden Gate Park.

Each of the thee survivors were prominent, and each refused to swear as to who was their attacker. The Doodler was black, you see. Being gay was controversial enough, but even in the gay community to be classified as a “Dinge Queen” was fatal.

Thus The Doodler walked. He stopped. He walked. He has been silent since then. So not so compulsive when he saw SFPD leering at him.

The case has very little information on it. The survivors are dead or won’t talk, and if the San Francisco DA’s office even remembers it I’m not sure how they would proceed.

It is time to proceed with trying to break a case that is forgotten, though one of the most exotic ever, where the culprit can be identified, and where the case should be laid to rest. But I don’t think anybody knows how to deal with a lack of conspiracy. Evidence surrounds testimony, which has grown very thin, and no one wants to talk.

Since 1990 Gian J. Quasar has investigated a broad range of mysterious subjects, from strange disappearances to serial murders, earning in that time the unique distinction of being likened to “the real life Kolchak.” However, he is much more at home with being called The Quester. “He’s bloody eccentric, an historian with no qualifications who sticks his nose into affairs and gets results.” He is the author of several books, one of which inspired a Resolution in Congress.