Things are hotting up in the search for D.B. Cooper. My theory, as you know, is that Cooper came from the Portland area already. Here he boarded the Boeing jetliner on Thanksgiving Eve 1971 and headed to Seattle on the “milk run.” To this place he returned after he made his daredevil jump with $200,000 clams. I like my theory. This fits my POI’s residence. Much in my POI’s background fits the profile. For example, he was a Navy AKAN in Korea.

However, attention has been drawn recently to the theory that D.B. Cooper, the alias for the infamous and still-mysterious skyjacker, worked at Boeing in the Seattle area. An examination of the clip-on tie he left behind before jumping into mystery over the forests of Washington reveals particles that indicate he worked at Boeing. These particles are: “cerium, strontium sulfide and pure titanium.” Citizen Sleuths, the organization that examined the tie, asserts this strongly suggests contamination from a Boeing development area. 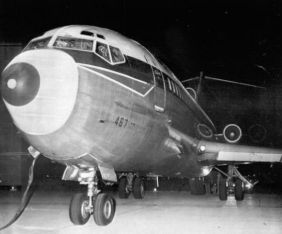 A Seattle based D.B. Cooper would make sense, but without an accomplice it is hard to imagine success. The scenario would be: he was driven to Portland by an accomplice, caught the plane, committed the skyjacking, then jumped back near Portland into the forests and there somehow met his accomplice. Remember, this was a windswept, stormy night. If doing this on his own, he had left his car somewhere in southern Washington . . . but how did he get to the airport from the rural areas of southern Washington?  In any case, he was driven back to Seattle or drove himself.

Like all theories, it is easy, but logistics is difficult. How to pull something like this off successfully?

At the time (November 1971 and soon thereafter) rumors circulated around the little hamlet of La Center, Washington. These rumors even found place in the 1979 episode of In Search of . . . in which Leonard Nimoy cautioned they were “highly questionable.” These rumors spoke of an unidentified light plane that frequently made landings in a field nearby at night and there awaiting it was a car. The implication was that these were dry runs between Cooper and his accomplice. The implication again was that the car would get Cooper after he landed and bring him to the field and plane and then it would take off with him and the ransom money.  . .or a fraction of it.

A bit complex. The other accomplice, presumably, drives away in the car.

It is a fact that no one knows what happened to D.B. Cooper. No trace was ever found of him and it took 9 years to even locate a fraction of the ransom money. It had floated for some time in the Columbia River and been beached in a storm at Tina Bar. There $5,800 bucks worth of the $2oo,000 was found in 1980 by a kid raking sand to make a campfire.

For the Feds, especially for the lead investigator Ralph Himmelsbach, this was proof that Cooper splattered when he had jumped. He hadn’t survived. Himmelsbach had a low opinion of Cooper. He didn’t like the popular treatment of him as some kind of “Jesse James of the Jet Age.” He was a desperado, a goober who never could have survived the jump.

But it is a fact that nothing else was ever found. No red parachute, no clothes, no briefcase, no bones. In 1978 Carroll Hicks while hunting 13 miles from Castle Rock, Washington, discovered the plastic warning placard that had been ripped from the inside door of the Boeing 727 when the aft stairs had been lowered. It was possible to find even such a small, delicate item as this. Following the drift of the Columbia River, it seemed Cooper must have splattered in the Washougal Valley area, but no trace has ever come of the parachute or anything else. Moreover, wind estimates don’t allow for Cooper to have made it that far by drift from the path of the airliner.

The location of a fraction of the ransom money has only added to the mystery of D.B. Cooper. But the greater mystery comes from he dragnet. This was world news. Nationally both in Canada and the US the sketch representing D.B. Cooper was plastered everywhere. Yet no one recognized him. He had a unique, long face with slender nose. He was middle age. No one recognized him? No neighbor, relative, friend. What’s more, no one went on the Doe list. No one was reported missing. No one failed to show at a motel, back at home, no abandoned car was found whose owner matched the FBI sketch. 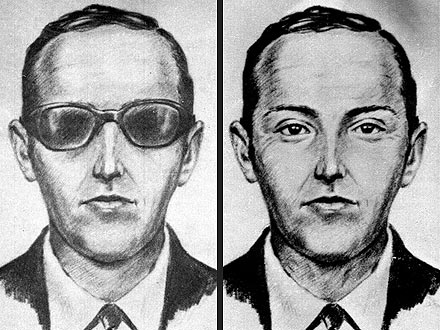 The only conclusion was not a palatable one– the mysterious man calling himself Dan Cooper had survived and returned to his normal life. There was no one to report missing.

But after 1980 it seemed certain he was dead because the money indicated he splattered and eventually it had drifted into the Columbia River. Yet if he was truly dead, how to explain no one was ever reported missing?

Until the 21st century the FBI held to Himmelsbach’s views that Cooper was a dead deadbeat. One of the Feds in charge of the case then wasn’t so sure. He thought Cooper had survived.

It is indeed impossible to explain all the clues and sew them together into one coherent theory. The material on the tie Cooper left behind is another clue. But had Cooper died in the drop, everybody at Boeing would have noticed a coworker missing, especially if the sketch was remotely accurate. No one at Boeing reported a missing man. So, did Cooper survive and return to work, thus allaying any suspicions?

More and more it seems the only theories that can work are those that accept that “Jesse James of the Jet Age” had survived. Why then the money on Tina Bar? Why was no dime of it ever spent elsewhere?