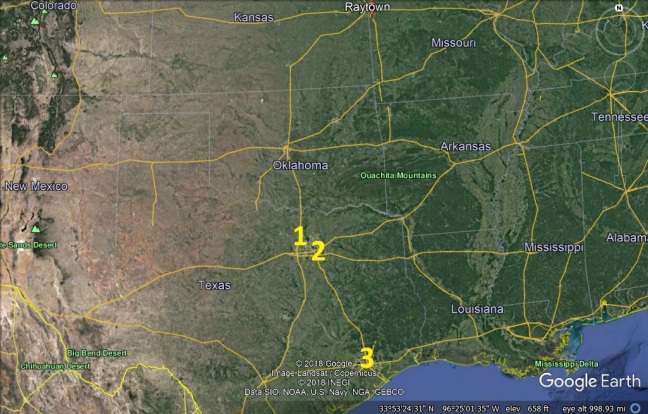 There is so little out there on the I-35 victims that there isn’t much one can say about them, but paradoxically they may be able to speak much in terms of outing the I-70 Killer. And I think if the victims in Texas could speak, that’s what they’d want to say. Unfortunately, they haven’t been given much of a chance since the details are so sparse. We can only detect a general pattern.

After his May 7, 1992, attack in Raytown, Missouri, on the outskirts of Kansas City, MO, the I-70 Killer quit. He quit as suddenly as he had started. During his crime spree, a genuine spree killing lasting only a month, he hadn’t varied his MO much. He obviously wanted to kill women, and for him the most convenient places were small shops and the most convenient times were off hours.

He prepared himself enough to get away with it. He had watched the shops enough from across the street or knew already that a young woman managed the store. He rubbed his .22 cartridges with jeweler’s rouge to make sure there was no problem with the automatic jamming. This is a little excessive for his MO. He just planned to shoot an unarmed woman in the back of the head. But perhaps this tells us he was ready for a shootout with the police if he should get cornered. Considering his month long spree, he seemed like a homicidal maniac on the loose, so the idea of being ready to go out in a blaze isn’t farfetched.

I think it is fair to say he wasn’t the mumbling transient, even if he might have used that image as a cover. 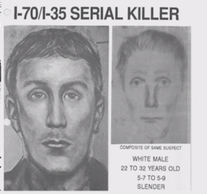 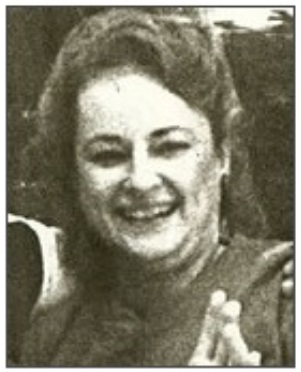 A lot else fit the I-70 Killer MO. Glassock’s  antique store was a small shop and it wasn’t far from the highway. In this case, the highway was the I-30, a tributary of the main highway I-35. And I-35 was the main highway south from the St. Louis and I-70 area. It went through Wichita, Kansas, where the I-70 Killer had taken his 2nd and 3rd victim, so it was a highway that the I-70 Killer worked right away. (Then he kibitzed back and forth in between his first strike point in Indianapolis and Wichita.) Nothing indicated that there were similar murders in Oklahoma City, the only other main city on the I-35 south, suggesting the same killer was moving south and following the highway. But after Oklahoma, Fort Worth was the next major city.

Fort Worth is just west of Dallas and, of course, on the I-35.

In addition, Glassock’s shop was on a main road off the highway. Her age at 51 made her an outlier in terms of the I-70 Killer’s victim, but he had also made a mistake and shot a man with a pony tail in the back of the head. He could have made a mistake about age in Fort Worth, or age simply meant nothing to him after all. Also, who robs an antique store in an older part of town while simply driving through? Except for the age of the victim and the fact it was a different .22 caliber, the pattern was the I-70 Killer.

Yet it was one murder in a shop. Unfortunately, those happen and it doesn’t mean a serial killer is afoot. However. . .

Nearby in Arlington, Texas, it happened again. This time everything fit the I-70 MO. The location was off Highway 20, the next major cross highway along the I-35 south of Fort Worth. The killer was obviously moving along the I-35 going south. The victim  was a young brunette, Amy Vess. She was working in a dance apparel store at 4001 West Green Oaks. It’s in a shopping center near the main road from the highway. The date was November 1 (gravestone says death on November 2), 1993.

The pattern wasn’t reflecting the month long spree like back in April 1992, but it seemed either the I-70 Killer had started again, without the same urgency, or another creep was hitting the Fort Worth area and basically doing the same thing, just not all in one month in fairly rapid succession.

The rest of November and December would pass without another murder. But in January 1994 it happened again, further south in Houston. This meant the creep had followed the I-35 highway to San Antonio and then went west to Houston. Texas realized they now had the “I-35 Killer.”

He made a significant mistake in Houston, and we will come to that case in our next post.

* * *
Since 1990 Gian J. Quasar has investigated a broad range of mysterious subjects, from strange disappearances to serial murders, earning in that time the unique distinction of being likened to “the real life Kolchak.” However, he is much more at home with being called The Quester or Q Man. “He’s bloody eccentric, an historian with no qualifications who sticks his nose into affairs and gets results.” He is the author of several books, one of which inspired a Resolution in Congress.